Here we are again, it is that time of year again where we look at how much it costs to build a hotel.  Despite what has seemed like a euphoric atmosphere for new build, 2014 construction for residential building has been billed as “anemic.”  This lack of residential construction has served other asset classes well in limiting the increase in costs of construction.

This is obviously market by market and there are markets where construction costs have escalated.

The great recession’s impact has still impacted the construction workforce.  Before the crisis, the workforce was made up of 7.5 million workers and has declined by 27%.  This shortage of skilled laborers will contribute to increases in construction costs while development picks up.

Technology in both design side and construction is leading to construction efficiencies. Modern construction managers have access to sophisticated project management and modelling tools. Architects are increasingly aware of changes in construction costs and are designing projects around constraints within their market.

The survey notes that accommodations for millennials has taken a front seat in design.  While we have detailed what millennials want, it is popular to design communal working areas with all day food and beverage options.  Easily accessible outlets, wiring for high speed internet and local personality.

According to our 2014 Hotel Construction Cost article, the November 2013 STR national pipeline outlook report showed 91,000 hotel rooms under construction and another 228,000 in planning and final planning stages totaling 319,000 rooms.

The November 2014 pipeline shows that number has increased to 413,419, a 29% increase. While this is a significant uptick, we are still making up for 10 years of limited supply growth and healthy growth should last for another 2 to 4 years.  Since 2009 the net increase in supply represents only a 3.2% increase.

We have all been a little shell shocked after the last crisis, we aren’t there.  This shows the pipeline of US hotels from 2008 and compares it with current numbers (CBRE US Hotel Outlook). 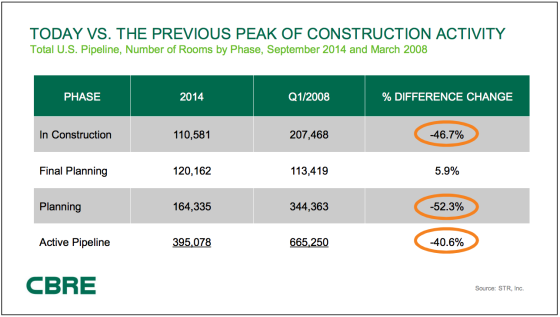 Take into consideration where we were at prior to the economic crisis, in 2008 we had 185,000 rooms in construction and almost half a million planned.

The majority of this supply under construction is represented by select service hotels. Seen as less of a risk because of a lower cost basis, brands like Hampton Inn, Courtyard by Marriott and Aloft have been popular low risk development investments. Boutique hoteliers like us like repurposing existing buildings and hotels and repurposing them into upscale boutique hotel properties.  The Pelican Hotel, was a Best Western conversion while the Angler’s Hotel was a historic hotel that had been vacant for several decades.

Every supply forecast dating back to 2011 has been overly optimistic pointing to further sustainable growth than originally expected (CBRE US Lodging Outlook).

The below offers an average cost per room for a hotel development.  While we recognize the per-room range varies wildly this should serve as a guideline. Prices in hotel markets with high land values such as New York City, San Francisco and Miami will be at the top of the scale while projects in secondary markets with low labor costs will be in the lower end of the bracket.  Boutique Hospitality Management is available for feasibility studies and cost estimates for your hotel projects. Contact us if you want to know if your property is a viable hotel. 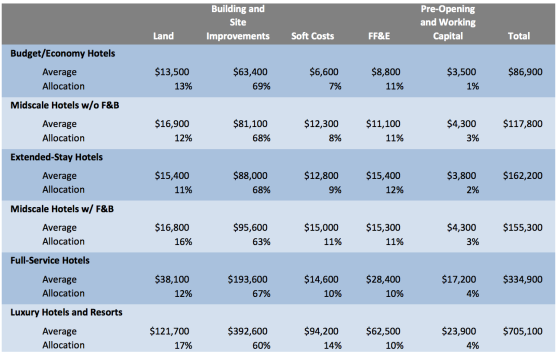 Not entirely sure which chain scale you fall under?  This list of all of the chains and where they fall Hotel Brands by Chain Scale should give you a better idea.