To read the most recent cost survey, check out our latest article for how much it costs to build a hotel in 2015.

It is that time of year again when we look at how much it costs to build a hotel.  It seems every major city is seeing a booming growth of all commercial building types including hotels.

According to McGraw Hill, during the first 11 months of 2013, nonresidential building climbed 8% relative to the same period a year ago. Commercial categories as a whole were up 16%: warehouses +32%, hotels +24%, office buildings +23%, and retail +1%

With that means… higher costs.  Let’s take a look.

The November STR national pipeline outlook report showed 91,000 hotel rooms under construction and another 228,000 in planning and final planning stages.  Take into consideration where we were at prior to the economic crisis, in 2008 we had 185,000 rooms in construction and almost half a million planned.

The majority of this supply under construction is represented by select service hotels.  Seen as less of a risk because of a lower cost basis, brands like Hampton Inn, Courtyard by Marriott and Aloft have been popular low risk development investments.  Now that the financial markets have eased up, the pipeline now shows a surge in full service hotels.  Not considered however is rebranding of the existing supply, upgrades and expansions.

Due to global changes in supply and demand, Gypsum board (drywall) and lumber costs have become unstable.  Costs have swung almost as much as 100% from one month to the month prior.  Adding to costs is the period of which projects take to come to fruition.  Developers are increasingly cost conscious placing more emphasis than we saw in years prior.

Contractors are winning and losing bids based on labor costs.  With a shortening supply of skilled labor, we forecast a rise in labor costs with the continued expansion of new development projects in all sectors. Boutique Hospitality Management was involved in 6 development projects in 2013, we saw that obtaining financing on projects was much easier than the past 5 years. The availability of cash has been the primary issue in getting projects off the ground.  Getting the right team involved on the right project has been the most important factor in a potential projects success.

The below offers an average cost per room for a hotel development.  While we recognize the per-room range varies wildly this should serve as a guideline.  Prices in New York City will be at the top of the scale while projects in secondary markets with low labor costs will be in the lower end of the bracket.  Boutique Hospitality Management is available for feasibility studies and cost estimates for your hotel projects. Contact us if you want to know if your property is a viable hotel. 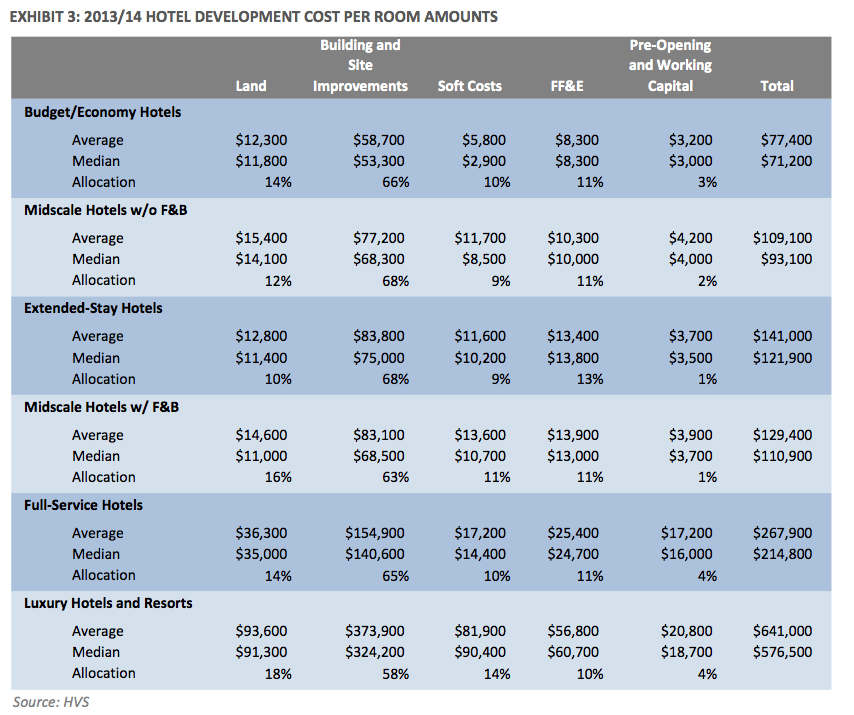